Now that the 2017 USEF show season is officially over, let’s take a look back on the past year of competition to see how we did and how we progressed.

Our first outing of the year in January, and our first time competing in the Highs! This was ostensibly our first time doing the 1.10m classes, but I’ll eat my socks if these jumps were actually 1.10m. They looked maaaaybe 1.0m. So a soft entry into the Highs, which was probably a good thing.

I had zero connection due to constantly slipping reins, but we were able to make it around quickly enough to place well. I was still learning about finding my track and Frankie was still learning about how do turnz, but he was a good sport and we learned a lot. We ran into trouble at the triple combo in the classic which was likely due to that being the third class of a long cold day, and both of us losing energy. Overall, this was a positive first outing of the season despite the bobbles.

Our first real outing at a true 1.10m, but I felt much more confident than I had in January. We were able to go back and do a triple combo really strongly, and he handled the sloppy footing like a champ all weekend. Francis did his first 1.15m round with my trainer and won it. My main areas that needed improvement were letting him get fast and flat and not really doing much of anything about it. We weren’t to the point of doing the inside turns quite yet, but we had noticeable improvement and both of us started knowing what we were doing in the ring.

Oh Upperville. This was probably our best show of the year. I could’ve done a better job of keeping him between my leg and hand, and I didn’t ask hard enough to get the turns I wanted in places, but we went around some big tracks and it went much more smoothly than it had in the past. It was only 2 classes and we didn’t place, but I consider these two of our best rounds to date. For my own record of improvement, I was happy with our ability to go out cold and warm up concisely and correctly both days. 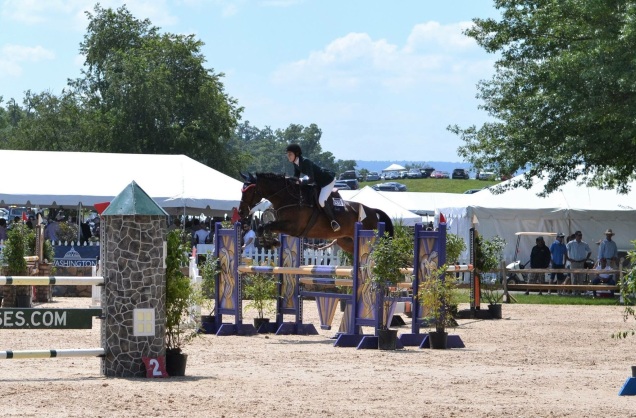 By far the biggest and most intense competition experience I’ve ever had. It was so much more involved than any other show- there was a jog, there were rider’s meetings, there was the team aspect. And the courses were definitely bigger and harder than we’ve done before. I could tell that we were some of the less-schooled competitors there in terms of miles and experience, but we held our own and had a couple of strong rounds. We were able to make the inside turns everywhere we wanted to, we opened up our stride, and it was a great stretch of our abilities.

Our foray out of the jumper ring and into the equitation! This was a great test of our ability to reel it in and do something a bit more polished. Was it expert-level? Absolutely not. Did we have to think very hard about what we were doing and change our ride accordingly? Absolutely. But I’m so pleased with how well Frankie was able to relax and give me a good effort in a new ring, over very different types of jumps. Despite the small class sizes, I’m proud of those ribbons.

Our last show of the season was a strangely appropriate mishmash of the entire season. We ran into trouble at a combo, just like in our first show- but we went back and fixed it strongly. I let him get fast and flast like our second show- but he has learned enough self-carriage to bounce up to the jumps. We used our warmup to school some skills, like Upperville. We used our inside-turn skills and eye to the bigger fences, like Team Finals. It felt like we were really able to apply what we had learned- not necessarily in having the best rides, but in being able to go out there and make stronger corrections more quickly. There were highs and lows, but I walked away proud of my horse and feeling like both of us have improved immensely since the beginning of our season. Getting a high ribbon in a competitive class was big icing on the cake.

I’m excited for our 2018 season! It looks like it’ll be a year of quality over quantity on the show front- with some big hitters like WEC and Lake Placid on the agenda, I likely won’t have the budget or vacation time to do much else. I’m hoping to fit in some smaller one-days nearby to get points, make a showing at Upperville again, and see if I can try some new venues. It’ll depend a lot on the money situation (as usual!). We may also try to fit in a clinic or two, depending on who comes to town. I’m not going to commit to a division quite yet- I suspect we’ll want to spend most of our time in the Highs at 1.10-1.15m, but I do want to test our limits a bit in a 1.20m class if possible. We’ll see how Frankie and I are feeling as we get more into show season. I very very much want to continue growing and progressing up the levels, and I can’t wait to get to work!

I’m a mom at home, professional in the office, amateur in the barn, and working hard to be really good at all of it. Stay tuned for a little slice of my life in the ring!