We made it through our first week of WEC! As I write this, it’s Monday morning- the ponies have the day off, but I’m sitting in our barn area answering emails and catching up on work. I can hear the horses munching their hay, I can see Frankie poking his nose out at me to say hello every so often, and I still can’t believe how lucky I am to be here.

But let me back up to the start of the week! Frankie arrived here last Monday and according to Trainer, handled the travel like a champ and came off the trailer feeling dandy. Not bad for such a long ride. He got training rides Mon/Tues to get him going while I was impatiently waiting to depart.

I arrived Wednesday afternoon. It was certainly a long drive (with the several breaks I took, about 8 hours) but not too terribly difficult, and with my early 5:45am start I was here by early afternoon. I even got to hop on for a brief hack around the Sanctuary (the jumper ring) and pop over a few jumps in the warmup ring in a mini-lesson. Spoiler alert- Francis felt like a million bucks. We kept the jumps tiny and just focused on super straightness and power off the ground. I can feel it when we get it right, it’s just developing the feel to consistently get it every single time.

You guys, this place is HUGE. ENORMOUS. ALL INDOORS. On days like today where the weather is nice, they open up allll the doors to let the fresh air in, but when it’s cold they button us up and blast the heat- it snowed last week, and I was too warm wearing a light sweater inside that day.

Our first day of competition was Thursday, where we had signed up for a Medium Schooling Jumper class at 1.07-1.10m to get us in the ring and feeling good. I don’t have a picture of the course diagram, but I do have something even better- I have video! Don’t get mad, but this is the only video I have of the entire week.

Overall I’m really pleased with this round! It was our first time in the ring and Francis was a consummate professional. I got popped out of the tack a few times and buried him to the base of at least one jump, but he was forward and fresh and had more than enough power to bail me out. Not perfect, but a fantastic start to the week. This was a blue/red round (clear rounds get a blue ribbon and the rest get a red) and despite some clonking of rails we managed to go clear- I ain’t mad about starting the week with a blue ribbon!

I spent the rest of Thursday getting work done, hand walking Frankie, cleaning tack, and generally soaking in the awesomeness that is getting to work remotely.

Friday was our first day of the division- we just had one II.2.b (immediate jumpoff) class for the Highs. Course here: 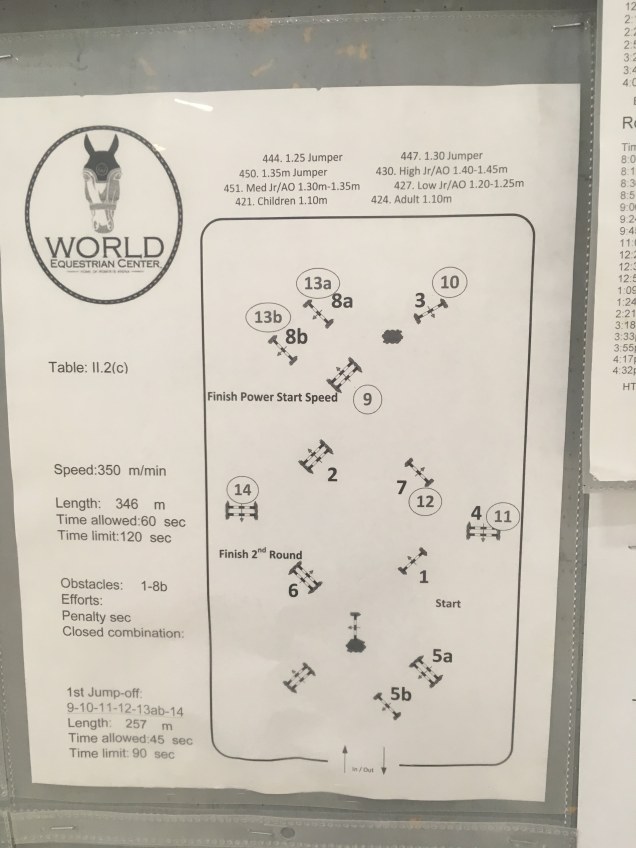 Frankie warmed up fantastically, and jumps 1-4 came up smoothly and beautifully. Then I forgot literally everything I’ve ever learned and shoved him at the combo on a half-step. REAL SMART. Frankie very understandably declined to go into an in-an-out with an orangutan piloting. We circled around to re-approach, I shoved him at it just as badly but he is an excellent goober so he made it through somehow, I lost a stirrup, I shoved him at the next jump, and he was like OK THIS IS NOT WHAT WE HAVE PRACTICED. And then I left the ring apologizing to my horse.

I could not tell you why this happened. I mean I can clearly tell you what went wrong and how I could’ve fixed it, but I cannot figure out why I went full potato. I was feeling really frustrated with myself to be honest. I kinda wanted to go crawl in a hole and wallow a bit in my own inadequacy. Luckily, I work with a trainer who is a strong believer in ending on a good note- she arranged for me to go around one of the Low classes to get our confidence back. It wasn’t a perfect course, but it absolutely served its purpose of giving us our mojo back. Wise lady.

Saturday we were signed up for two classes- a speed class, and another jumpoff class. My plan was to go in for the speed class and see how it went, and then decide if we needed another round to school before the classic. 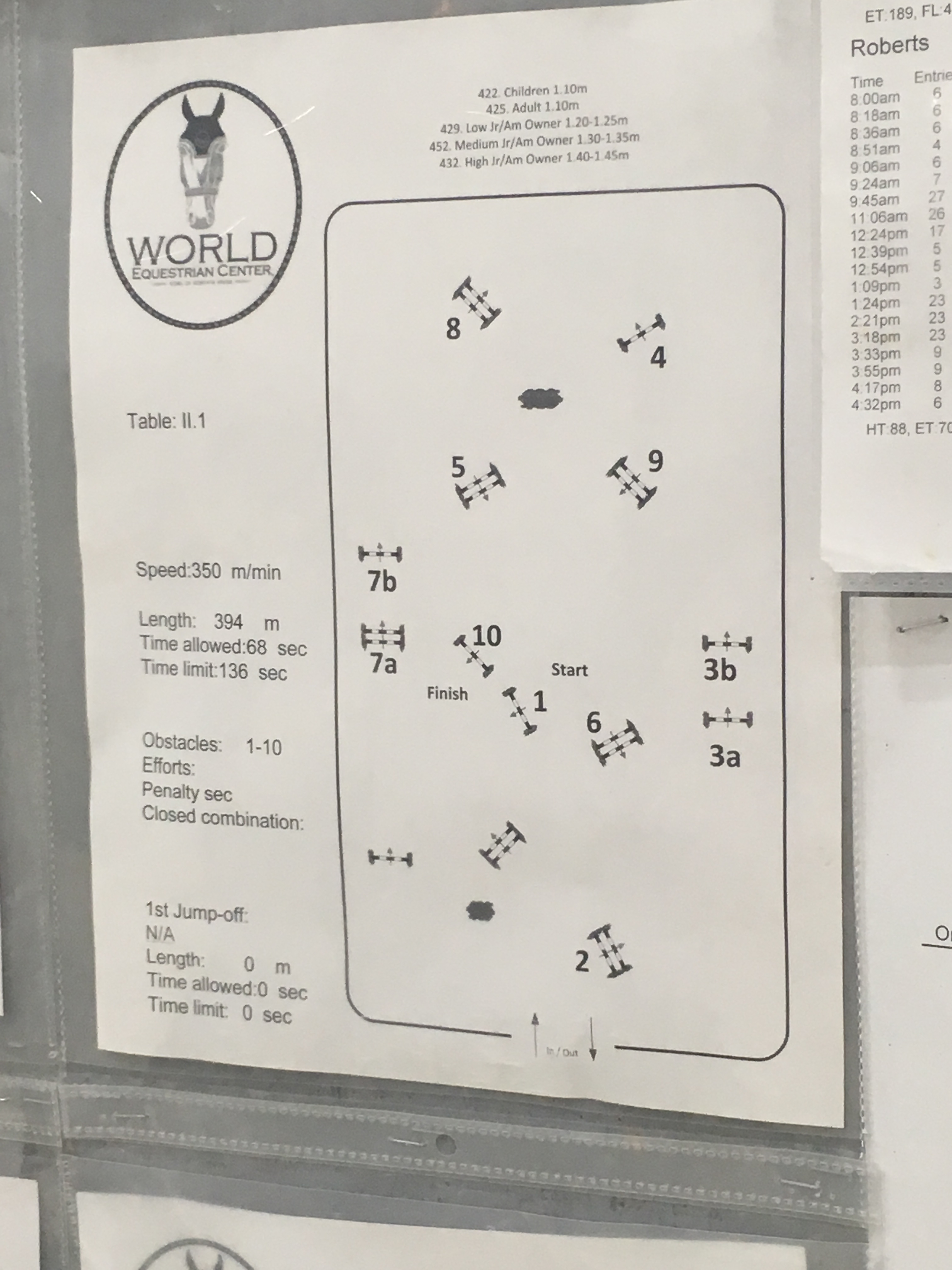 Jump 1 towards home came up perfectly. I went between the oxer and vertical and then gave myself a few straight strides to 2. I kept him straight between my leg and hand into the combo, and was able to soften and kick a bit into it. We ended up leaving out a stride out over 4, but he was so balanced and responsive that I was able to do the turn inside 8 to get to 5. He fired over that oxer like you wouldn’t believe. I had to steady him a bit towards home down that diagonal line. Then I went around the oxer to give him a straightaway to the second combo, and he just flowed over that so beautifully. I had to sit him back to a short one over 8, then opened up before rocking back for the final line towards home. Double clear and fast.

I’m not exaggerating when I say that this round was my best round I’ve ever put in at a show. It wasn’t picture perfect at every step, but I felt so dang in tune with my horse and effective. Every inside turn came up effortlessly for him, he rated back and forth off my seat super quickly, and was firing on all cylinders. This is the round that I would KILL to have video of.

We left the ring sitting in first, and held that lead to win the class. Our first blue ribbon as a team. There were tears. This felt like a ribbon that we had truly earned by being good, not just by being lucky or by having soft competition.

We decided to scratch the next class- we weren’t going to get any better schooling than that! I’m also a fan of saving Frankie’s legs where we can, there’s no need to tire him out unnecessarily.

Sunday was classic day, and also visitor day! We had Monica (formerly of the OTTB Eventer) and Tracy of the Printable Pony come to visit! It was sooo fantastic to get to connect in real life and introduce the Frankfurter. Blogger meetups are my fave! 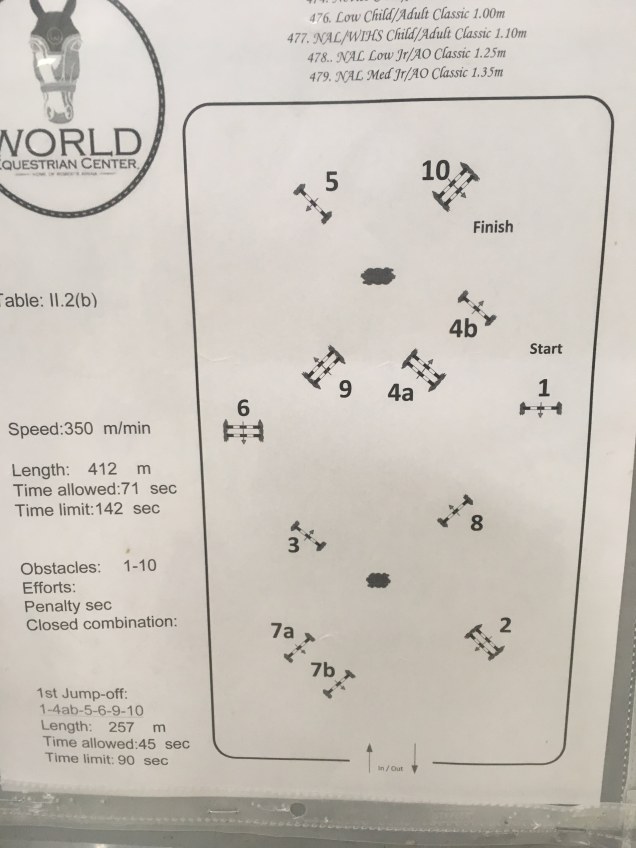 Jumps 1 to 2 felt good. I let him get a little fast and flat through the turn, so we lurched a bit over 3, but I was able to get him back for the combo (we did knock a rail on the way out). 5 to 6 was a bit of a mad scramble as I didn’t really half halt enough (also that oxer at 6 was so freakin’ huge I almost peed my pants when I walked the course), and we kinda barreled our way through 7ab. Again- I wasn’t supporting him enough. He was more tired than on previous days and that means he needs more support from me to maintain the bouncy canter we needed. Coming off the combo I put my leg on HARD and got him underneath me, and the last three jumps felt fantastic! Really bouncy and flowing well.

So not our best course, but nothing to be ashamed of either. We spent so long developing that “forward” button, now I’m trying to transition to better channeling that forward without killing the energy. It’s all part of the process! Like I told Monica and Tracy- I might not be the best rider out there, but I’m definitely having the most fun. Pretty sure I have the bestest horse out there too.

Frankie has felt like a million bucks all week. I’ve loved working with the french-link elevator, and Frankie has been going fantastically in it. It’s soft enough that he wants to come over onto the bit, but I actually get a real reaction when I half-halt. We’re still learning, but I think it’s a great tool in our tool box.

You guys, he is a different horse than I brought home almost 2 years ago. He is such a patient teacher as I learn new ways of communicating with him, and he continues to give his all every time we raise the bar. He’s still willing to bail me out when I need it, but he is ready and able to give me such incredible work when I’m on my game. I feel like the luckiest girl on the planet to have this kind of partnership with this animal. EMOTIONS.

He’ll get today off, a light hack on Tuesday, a short lesson Wednesday, then we’ll back back at it on Thursday! I can’t wait to tell you how it goes.

I’m a mom at home, professional in the office, amateur in the barn, and working hard to be really good at all of it. Stay tuned for a little slice of my life in the ring!