Frankie and I got to do our mock dressage show that I mentioned to you last time! We opted to do USDF First Level Test 3 and the ANRC Novice Flat Program. Our trainer was able to use some poles and cones to get a dressage court set up in our outdoor, she enlisted some barn kids as scribes, and set up camp at C. She has spent time in Germany working at a dressage facility and we spend a lot (A LOT A LOT) of time on our flatwork in her program, so I was excited to get to put things together into some full tests.

I do want to caveat that I have ridden my horse literally 3-4 times since early March, and each of these times have been short simple rides with very little hard work involved. My practice for these tests involved laying strips of paper on the ground in my empty spare bedroom and prancing around like a madwoman to memorize them. I’m not sure it’s possible to be less prepared that I was for this haha. But when you have a perfect Frankfurter, you go for it.

We kicked off with 1-3. I over-anticipated the first lengthening and we had a little upwards break, and my geometry DEFINITELY needs work. But overall? I felt like it rode great. Frankie stayed very in tune and interested in the work; I think the constant changes of direction/gait really worked to his strengths to keep him focused. I decided to sit the trot through most of it so I could use my seat more effectively and that was definitely the right call for Frankie – he tunes in SO much better when I have that extra aid solidly on. I got my sheet back and was pretty darn happy with my scores! 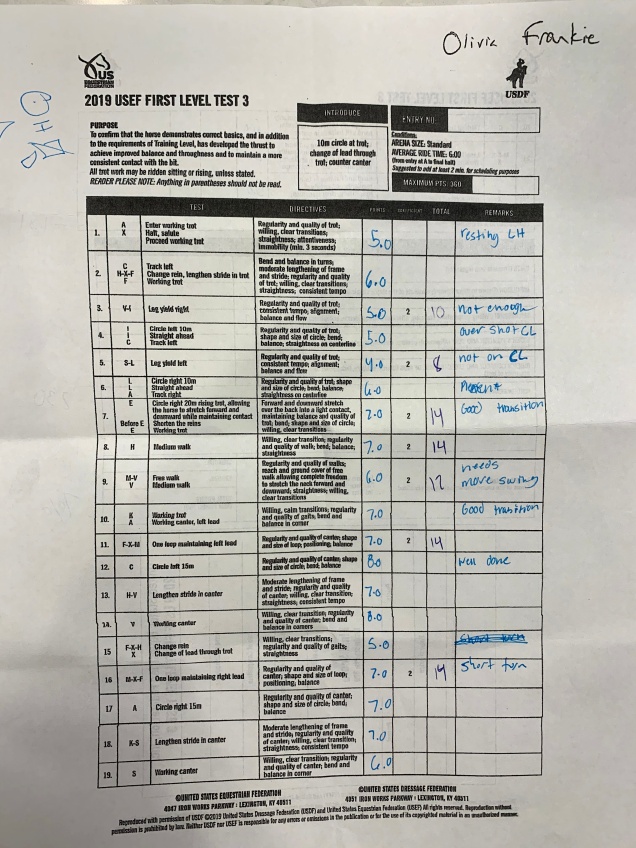 In both leg yields I didn’t quite make it to my mark. Frankie has really solid leg yields installed, so I can easily improve those movements by asking for a tad more oomph and watching my markers. I also need to be more careful with my turns: a few times I overshot, and it would work better for us to start our turns a hair sooner and then leg yield out as needed.

Our halts also need some work, this isn’t an area we’ve spent a lot of time on and I tend to let him rest a leg instead of holding his posture. In all areas of improvement, it comes down to me asking more accurately.

I think with some more attention to my track and some tuneups to make sure we’re getting prompt transitions, we could do pretty darn well! I will admit to you all that we did this in his usual elevator bit, which I know is not even remotely dressage legal. Now that I know that Frankie seemed to really enjoy the challenge of it, I’m determined to continue our search for a snaffle that he’s really happy in.

Our next test was the ANRC flat ride. Both of us had lost a little juice by this point and it lacked some of the zazz we had in the first ride. But I do have video of this one!

And here’s our score sheet: 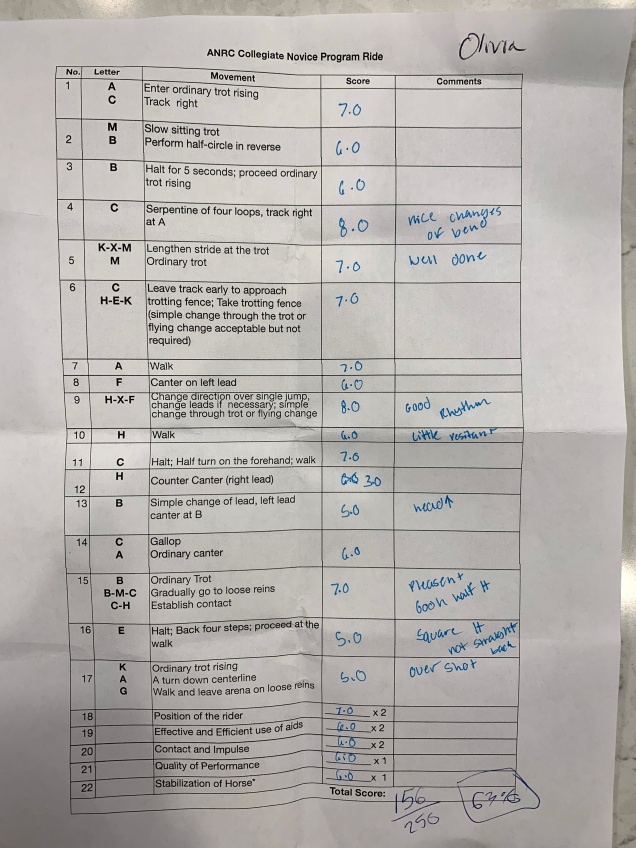 The biggest oops here was the counter canter. We picked it up just fine, did great down the long side, and then OUTTA NOWHERE Francis gave me a lead change around the short end. If you’ve been following me for a while, you know that we have literally never schooled changes on the flat. He has a solid counter-canter, but to be fair we haven’t schooled it in a while and MAN that dressage court is narrow. I can’t blame him for trying to catch his balance with me flopping around up there. He was NOT HAVING IT.

The other big UGH was the back. Again, my fault since we haven’t schooled this in some time. Some stronger points were our halt after the sitting trot (it was surprisingly square!), our serpentine where Frankie gave me some lovely smooth changes of bend, and our turn on the forehand. Despite our bad geometry at the leg yields in 1-3, he really does have lovely lateral buttons in there and I think that’s a great show-off point for him.

A big thing for me in both tests: I was floppy. The combination of not riding plus quarantine eating has not been kind to my muscle tone. I was sore for two days after this. Because I am WILDLY out of shape. Francis is the type of horse that relies a lot on his rider to help him hold his shape and balance and I certainly was not the most present for him in that regard.

But because this would not be a real hellomylivia blog post unless I ended this way: YOU GUYS FRANCIS WAS SO CUTE. He literally did a 1-3 test with zero practice and a supremely weak rider up top, and he did it ADORABLY. The two jumps in the ANRC test were the first two jumps I’ve done in over 2 months. And he packed me over perfectly. He was delightfully responsive, forward, eager to figure it out, and as always a total pleasure to ride. In case you’ve forgotten because I haven’t been posting a lot lately: he is total perfection in horse form and that is just scientific fact.

My heart definitely lies in the land of colorful sticks, but we had a total blast trying something new!! If I can (1) get myself back in shape so I can hold him together much more strongly and (2) find a snaffle that he wants to soften to, I’d love to take him out to try a dressage show sometime. He doesn’t have the flashiest gaits and I’m certainly not the strongest rider, but I think we could have a blast and do respectably at the lower levels. He thrives on learning new things and keeping it fresh, so who knows! Maybe my failed foxhunter turned lower level eventer turned pro jumper turned adult eq horse will also be my local dressage mount.

I’m a professional in the office, amateur in the barn, and working hard to be really good at both. Stay tuned for a little slice of my life in the ring!