It’s hard for me to believe, but my fourth blogiversary is already here! It’s so crazy that I’ve been writing about my adventures for so long, and that so many of you have joined the journey. Many of you have even been here since Day 1, and I’m amazed and grateful that you’ve stuck around. You’ve all been an incredible source of support, advice, hilarity, and general awesomeness over the years.

To celebrate, I did what I do best- I analyzed some numbers. Enjoy a few charts of this blog! 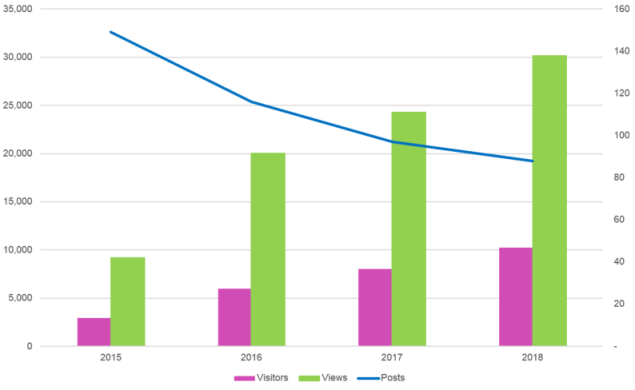 I thought this one was interesting! Visitors and views have both increased steadily over time even though the number of posts per year has declined. My hypothesis is that the content has gotten more relevant- while I did enjoy my lesson recaps, those didn’t encourage as much interaction as some of my more recent posts.

Based on the average % change in visitors and views (excluding the jump from 2015 to 2016, which was abnormally high), I can aim for roughly 37k views and 13k visitors in 2019. I mean, as long as I can maintain some decent quality of content, no pressure.

This one isn’t too surprising for me. Basically the number of comments I get on each post is fairly steady, but the number of comments per visitor and per view has gone down. I interpret this to mean that there are a fewer number of people commenting, but those people that do are more active. Like I said- not surprising. I don’t have the largest following, but those of you who stick around are a frickin’ fantastic group that I get to chat with a ton.

These are all the countries I’ve been able to reach over the last few years! My readers are predominantly in North America (consistently about 93% of my traffic), with roughly 4-5% of you in Europe, and the rest of you coming from all over the rest of the globe. Hi everyone!!

Some of the links you all have clicked on most often from here:

And some of the ways you have found me:

Some of my most popular posts by views:

And some of my most popular posts by comments:

And not to get sappy at you, but the fact that these are the ones you’ve commented on the most makes me so happy. Most of these were really big adventures and you guys were so awesome and encouraging about them.

A lot has changed in the past four years: I’ve moved (three times), gotten married, changed my name, changed jobs, bought The Best Horse(TM), traveled all over for shows, tried new adventures with the Frankenbean, and have learned more than I could’ve imagined. This blog and the community I’ve found with all of you has been a wonderful constant, and I’m so excited to keep sharing the adventures with you!

I’m a professional in the office, amateur in the barn, and working hard to be really good at both. Stay tuned for a little slice of my life in the ring!